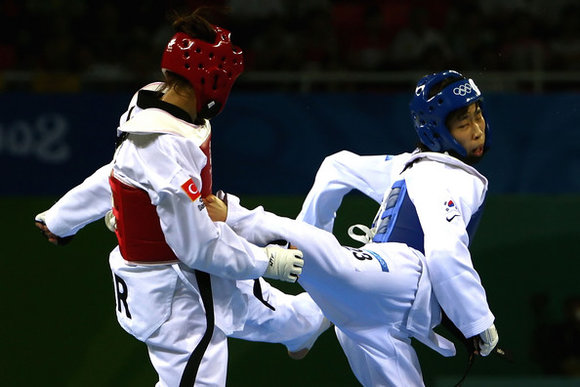 This week in my daughters Taekwondo class, the Master suited up the students in protective gear and had them compete against each other.  It wasn’t exactly the Olympics, but the kids were totally excited and into it, their mothers were universally scared for their safety, and the sound of their yells and their kicks thudding off padded ribs and stomachs could be heard everywhere.

My daughter had a tough night.  It was only here second time sparring with another student, and the Master picked an older girl with a black belt to be her first opponent, and an older boy (also with a higher belt) to be her second.   As her dad, I could NOT have been prouder of how she kept kicking, never let her guard down, never gave up or ran away against much stronger opponents.  I told her so after her matches.  I also told her something else as she stood there, trying to look tough with eyes shining with un-cried tears.  As she stood there looking up at me, I told her something I realized even as I said it was for me…and for you.

I told her: “We can trust the master.  He’s not going to put you in a situation where you will be permanently injured.  You got your butt KICKED out there, but the Master must have GREAT hopes and plans for you.  He put you with tougher opponents than any other girl in your belt class.  The Master must believe that you have great potential to learn and get even better”  (Then of course her Mom opened her eyes, stopped holding her breath, and gave my daughter the hug that she really needed more than my “wise” words.  :-)

I’m going to try not to forget that moment, and those words…and I hope you won’t either.  When you’re facing unbelievable opponents…when you are out-matched and overwhelmed…when you are getting your butt KICKED and wonder why the Master would allow it.

We can trust the master.  He’s not going to put you in a situation where you will be permanently injured.  You’re getting your butt KICKED out there, but the Master must have GREAT hopes and plans for you. The Master must believe you have GREAT potential to learn and get even better.