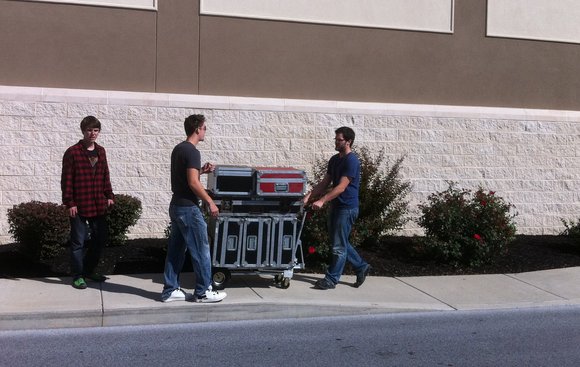 We’re celebrating our fourth birthday this week, and I can’t help but think back over the many unexpected things that have happened over the last five years since the idea of actionchurch was born.   One thing that I’m constantly reminded of, is the phrase that Paul used in Hebrews 11:34 to describe people who put their faith in God. He called them people “whose weakness was turned to strength”.  That phrase describes so much of the actionchurch story.

One of the biggest “weaknesses” we faced  from the beginning was a severe lack of time on my part to do “church business”.  From the beginning I’ve worked 40-50 hours per week as a painting contractor, came home every night to spend my evenings with my daughter and wife, and spent only a few early morning hours along with a few scattered lunch and breakfast meetings launching (and leading) actionchurch.  Clearly, that lack of time was a weakness.  Several people I respect and trust said that it was impossible to start and especially maintain a church (let alone a business and family) with that kind of schedule.  They were right.

We worked for nearly a year preparing for that first actionchurch service at Fat Daddys Nightclub on 2/10/08. We had three meetings during that whole process due to our family/work schedule. Jeff and Chrissie Compton “appeared” at the York Fair and developed the great program for kids in the upstairs disco that we still call actionkidz.  We all worked like crazy, and somehow it actually happened.   actionchurch began!   I got a sick feeling immediately after that first service when I realized that we would need to do it all again in just six days.   There simply wasn’t enough time for me do everything that needed to be done, let alone prepare another sermon. I’m not exactly sure how week two happened…How we survived…but on week two a long haired, really talented, and really sure of himself, “kid” named Josiah showed up and offered to help. He’s been my partner and helper ever since. He’s spent countless hours making actionchurch look, run, and sound like it does today.  (all while going to school, working full-time, and somehow convincing the lovely and talented Rachel to marry him… :-)

Over the past four years, countless others have “appeared” to help Michele, Josiah, and I.  I wish I could name all the names and tell all the stories…but that would take a book and not a blog post.   actionchurch happens each week because of countless hours of work done by people with jobs, families, and busy schedules…just like me.  I believe one of our biggest strengths as a church is our culture of “do-it-yourself” work.  actionchurch folks don’t wait around for the “pastor” or “church staff” to do what needs to be done.  actionchurch folks don’t expect church to be about serving them…they realize very quickly that church is about serving others.  The actionchurch Crew of tech wizards, children’s leaders, artists, dock-workers, and hospitality/events ninjas perform something really close to a miracle every week.  I walked around this Sunday morning during set-up and realized that MOST of the things that happen at actionchurch are beyond my ability to do…even if I had the time.

Four years later,  I still work 40-50 hours per week painting.  I’ve learned to write a decent sermon from a smartphone with a spray gun or a roll of tape in the other hand.  Josiah and I meet for breakfast one day a week.  I’m still so glad at the end of the day to go home to my girls,  instead of heading off to a meeting. (I suck at meetings anyway)   I’m typing this early in the morning before work…and although there is more I would like to say…I’m out of time.

One of the biggest strengths of  actionchurch, the way we Love God, Love People, and Take action together…not as a church staff and congregation…but as a team of co-workers…came from a weakness.

What are some “weaknesses” you pray about in your life?

Could they become a strength if you trusted God to use them?