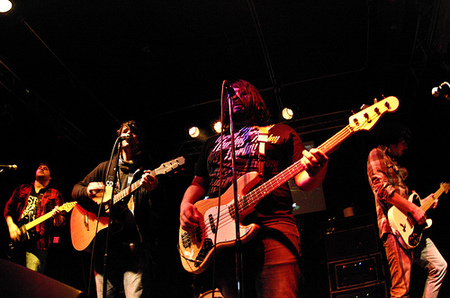 This week was the finale of the “Disaster” series.  As I said Sunday, some parts of the story of  Noah are disturbing-even frustrating.  The story of Noah messes with our ideas of God “rescuing” us.  Much of the responsibility for rescuing human kind and the animal kingdom fell on Noah.  God gave directions and gave warning, but it was Noah (and his family) who built the ark and gathered the supplies to survive the flood.  It disturbs me that no one else chose to join Noah and his family and be saved from the coming Disaster.   In the end though, the story of Noah is a story of Hope.  As I posted yesterday (here) there are many things in the story that give us reason to have hope in our God.

I’ve learned that the most chaotic weeks lead to the best Sundays…definitely the case this week.  I am excited to see the momentum gathering for the “greater things yet to come” in this city.

Failure to Excel onstage this week.  Even though they were a last minute change and were coming off of a late show at the Chamelion, it “felt” like they were supposed to be here this week.  Thanks Guys!

Josiah’s Birthday yesterday…and I forgot.  Another missed opportunity to buy the guy the twilight collection he’s been hinting about almost every Sunday.

I got locked in the Basement AGAIN.   Thanks Tyler for “rescuing” us!  :-)

Thanks Dave for the Chick-fil-a pez!  If you have “millions” of pez dispenser are you a collector or a hoarder?  :-)

We need several more folks to help out Bridge of  Hope with their Spaghetti fundraiser on April 10th.  Interested?  info@actionchurch.com   This is a great way to “take action” for a very worthy organization.

I say it often…but it never gets old…Thank you actionchurch crew!!!

Here’s a couple of pics (thanks Garrett)of a couple of elements of actionkidz latest teaching series “Indiana Jones and the search for love in action”.  The creativity level of the actionkidz crew is seriously off the charts!

Next week is going to be simply amazing for the kidz of actionchurch.  The crew has been planning and working for weeks.  Yet another reason to invite a friend (with or without children)  Easter Sunday…

One thought on “Sunday Recap: Hope in Disaster.”