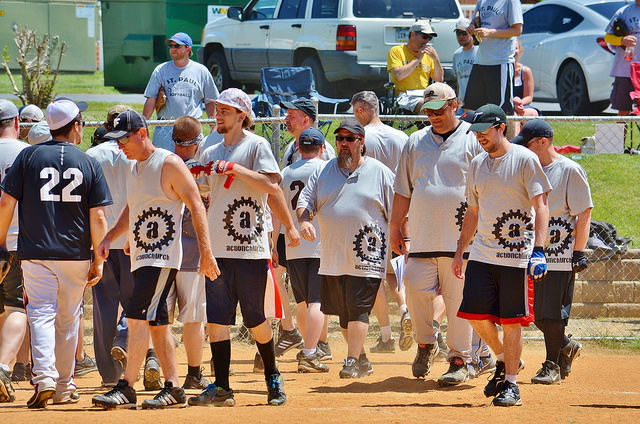 For years actionchurch flew under the radar as a great sports powerhouse in the York county area.   Maybe it was because we carefully downplayed any real sports prowess during pick up football games in the parking lot, or because we skillfully avoided using a SINGLE correctly worded sports analogy in over six years of sermons.  Carefully, strategically, methodically, we crafted an image of a church that just “didn’t do sports”…until…(cue the epic sports center music)…right now!

In 2014 the actionchurch softball team was launched…and soon became a sports juggernaut…UNDEFEATED IN WINNING the coin toss of EVERY GAME they have ever played!  That, in addition to world cup fever and a couple of coffee-fueled discussions among senior management team members, leads us to announce the first sports-themed sermon series EVER at actionchurch!  In the tradition of Paul the Apostle (who often used manly, sports themed, metaphors such as running and gladiator fighting) and Notre Dame football, this Sunday Bill will “KICK-OFF” the first sermon of the July “SPORTS CAMP” sermon series.

This Sunday we’ll also hear great music from “The GoAround”, and actionkidz has an amazing hour planned for your kids.  Make sure to get yourself, (and a FRAMILY member or three) ***HERE*** to Frank Theaters Queensgate.  Game time is 10:30, but you can tailgate earlier with other actionchurch fans and enjoy our usual assortment of coffee and maple donuts in the theater lobby.*   See ya there!