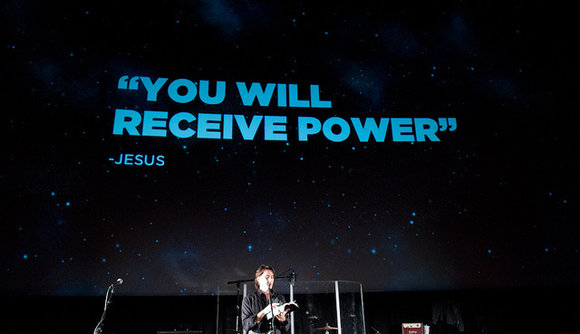 Sunday I mentioned in this week’s installment of “In God we trust” that when the disciples “kept asking” Jesus to use his power to fix the problems they had as a nation…to remove the heavy boot of the roman empire from their collective throats…Jesus instead said that they would “receive power to become his witnesses” (Acts 1:6-10)  Hindsight allows us to know what they did not as they watched him disappear into the sky.  Jesus was predicting the Church!  Jesus didn’t use his power to change their world, he gave THEM power to completely turn their world upside down by re-telling his story, and reenacting  his teachings as a community.  (And, if you’re keeping score at home, God USED the Roman Empire to spread his message to the whole world! More about that Sunday…)

Here’s some thing that I didn’t have time to share Sunday:  It would have been MUCH EASIER for Jesus’ followers if he would have “freed Israel and restored our kingdom” as his disciples pleaded with him to do.   Instead, Jesus chose to set up HIS kingdom through the local church.  The path that Jesus leads the church is rarely the easy one…  I believe that is still true today.

It’s EASIER to refer someone to a government program than it is to get involved in the messy business of helping them (and mentoring them) in their finances or lifestyle.

It’s EASIER to lobby legislators to write laws that limit behavior than it is to change hearts by being a light in the darkness.

It’s EASIER to entrust political parties to deal with homosexual marriage, abortion, drug abuse, and religious freedom than it is to get involved in the messy, broken, lives of those who need the good news of Jesus just as we did when we were in darkness.

It’s ALWAYS EASIER to trust a new idea or policy to “fix America” instead of the OLD and DIFFICULT truth found in scripture.

8 But you will receive power when the Holy Spirit comes upon you. And you will be my witnesses, telling people about me everywhere—in Jerusalem, throughout Judea, in Samaria, and to the ends of the earth.”-Jesus  (Acts 1:8)