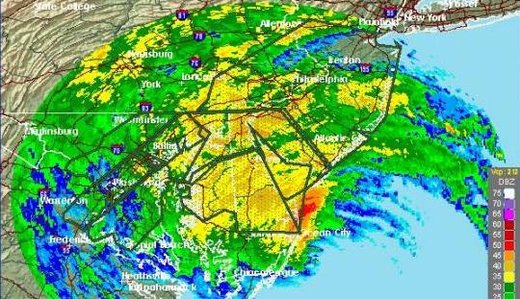 During the three and a half years that we’ve gathered for actionchurch, we have faced many storms…some of them weather related.  We’ve been through  blizzards.   We’ve loaded and unloaded our gear COUNTLESS times in rain and snow, but Sunday was our first experience with a hurricane.

I honestly wasn’t sure what to expect.  I wasn’t sure if we would have power…how bad the storm had been in York…if anyone would show up for church during the end of a hurricane anyway.

I decided to get to the theater a little early, and when I did I found that our truck was already there and already nearly half unloaded.  We were of course short staffed on Sunday, but the crew still started actionchurch on time.  We had an unrelated power outage (The guys from Calling out Closer need a LOT of power. :-) ) but that was quickly fixed. In short, in spite of the storm, people showed up at Frank Theaters and we had a great time doing church in our usual, “unusual” way.

***Even when there are storms, If we CAN show up-we show up.

***We concentrate on those who ARE there…instead of those who are NOT there.

***If it’s not possible to have an actual actionchurch “church service”, we serve the community in other ways.   (When the two-in-a-row blizzards of 2010 hit, we gathered on Sunday Morning and shoveled out cars from driveways and streets surrounding Club 19)

***We realize that storms are a part of life…we know that God is not “surprised”…so we don’t freak out that much when they happen…we just do the best we can, with what we have… and move on to the next week.

What do you do when it storms?  Do you have a “Storm Policy”?