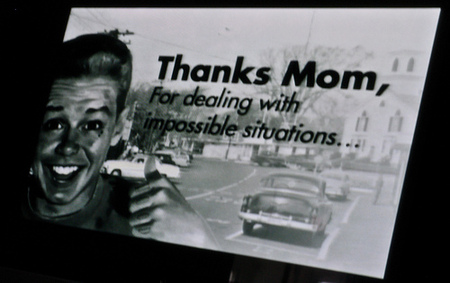 Yesterday was Mothers Day, and in the few moments between the frantic work of transforming club 19 into actionchurch-and everyone arriving for the service, we showed this video on the screens.

Pretty funny, right?   No church is really that “original”.  Everything becomes “traditional” at some point.  As I was thinking back over Mothers Day at actionchurch though, I have to point out a few things that happened yesterday that probably didn’t happen at many other churches in America.

Our “hip young man in trendy glasses” decided to start out the Mothers Day welcome with a few “your mamma” jokes.

The preacher got put in “time out” for messing something up soooo badly.  :-)

We had a family act of punk rockers(Divebomber) screaming out a Hank Williams Hymn at some point in the service.

At the “studio next to the stage” Families were lining up to have their pictures taken by Garrett.  You can check out the photos here.  (Invite your friends, he’ll be shooting Free family portraits for the next two weeks.)

We showed a clip from Family Guy to kick off the Mothers Day Sermon.

I talked about “Moses’ two mommies” and how mothers back in ancient egypt displayed the some of the same amazing characteristics that they do today.

I also may have said that if women had written the Bible, with all the “details” they put in their storytelling,  it would be about 7,000,000 pages long.

During all of the Chaos, hard work, little disasters, fun, teamwork and tension, people kept showing up to be part of the action.  Thanks to Steve and everyone else who kept putting out chairs for people arriving…yeah…it’s getting crowded in club 19!

People also gave Generously to help us continue the mission of Loving God, Loving people, and taking action.   We’ve taken in nearly $600 so far for the Survivor Banquet so far.  As I said Sunday, that’s not 120 plates sponsored…that’s 120 PEOPLE who will celebrate another year of life together on June 18th.  Thank you all so much!

So, was Mothers Day at actionchurch “contemporvent” or “growtivational”…I’m not really sure how to classify what’s happing on Sunday mornings at club 19.  I do know, though, that it’s “real” and it feels like family-and on any given Sunday I wouldn’t want to be anywhere else.