This Sunday was the finale for actionchurch, (no Services 12/27/09) and it almost didn’t happen due to the weather.  The amazing thing was that although most churches and business were closed Sunday morning…the actionchurch crew all showed up EARLY to turn club 19 into a winter wonderland one more time in 2009.  The only crew member who did not make it was Bill…who was actually doing an even more “actionchurch” thing…he was digging out all his neighbors who were snowed in.  I could NOT be more proud of being a part of the  crew.  They ALL put their faith in action each and every week.  As I said Sunday…If you enjoy attending actionchurch…Thank a Crew member!!!

Big thanks also to the ac all-stars for showing up in their snow gear and rocking all of us Sunday.  These guys (and gal) seem to bring something new to the mix everytime.  I loved having Dane on harmonica…and for me it’s not Christmas unless Lynn is singing Silent Night.   Jerry’s original was for  me the highlight, “Can you hear me”  may just be a Christmas Classic in the making. Thanks to all of the all-stars for the great music and fun they bring to actionchurch. 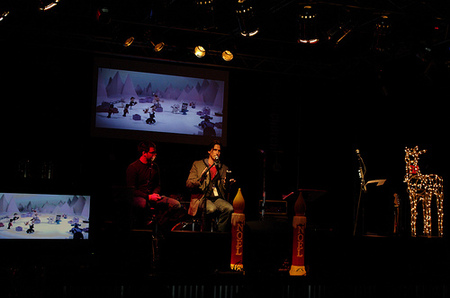 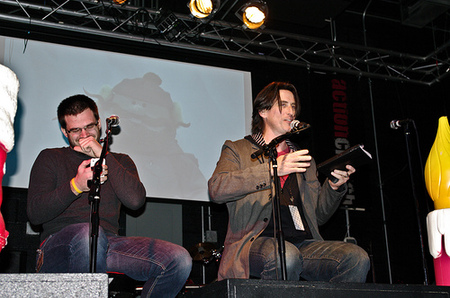 Had a lot of fun “exposing” Rudolph the Red nosed Reindeer as the most politically incorrect movie of all time. Yes, Santa did bully and exploit a “special needs” reindeer.   Also talked about the Genealogy of Jesus in Mathew 1.  Perhaps the greatest gift of Christmas is that God chose to use a long line of “misfits” , “screw-ups”, and yes…even a prostitute or two to be part of his plan.  There is no mistake that we have made, no loss that we have experienced, no shame or scandal in our past that can keep us from being part of Gods plan.

Thanks so much for your Generous Gift to our family.  It’s a privilege to be part of actionchurch.  Yes I got a pie also.  And yes, when Dave said my gift was something I like to preach about I said “Prostitutes”?   Only at a/c.    But,  as my much-smarter-than-me wife Michele said, THANKS so much for impacting the lives of over 500 kids this year for Christmas.  We received over 50!!! coats this week again.  We have had several families learn about our our “500 coats for Christmas” drive from the web and request coats.  Even though we had already turned in over 500 coats we will be distributing the coats brought in Sunday to the families that have requested coats…along with a little something extra for Christmas.   As Michele said so much better than I can…thanks for always going ABOVE and BEYOND actionchurch!  Thanks for putting on church like its for everyone in York county even on a snowy day when most folks can’t make it!  Thank you for truly being ACTION-church!