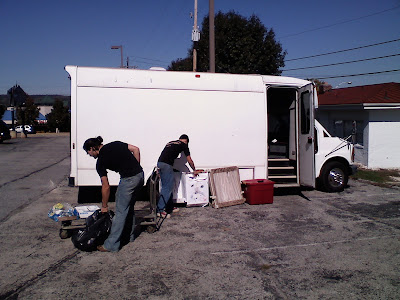 Today was moving our final Sunday at Fat Daddy’s Nightclub.
Next Sunday we will be meeting at Club 19 so we had to pack up all of the “church” in the “actionbus” after the service ended. I talked about “looking after you leap” about faith being obeying God without knowing the outcome. It’s so easy to read stories in the Bible and see the end result and miss the “process”. I talked about the blind man in John 9 who was healed by Jesus…after Jesus put “saliva mud pies” on his eyes and told him to go jump in the pool…I bet the still-blind dude with mud on his eyes had lots of questions about the outcome as he walked toward the pool. That’s the way it is when you follow Jesus.
The highlights: