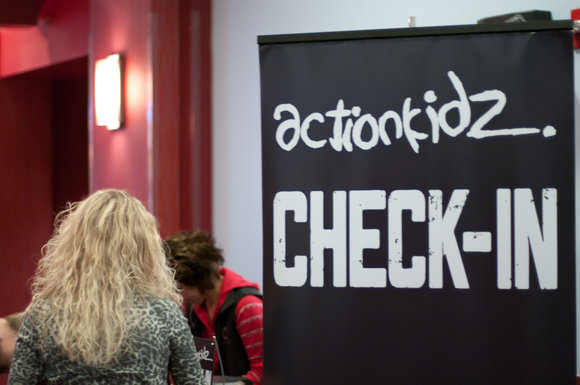 I am so thankful every week for the great number of people who chose to be part of the actionchurch crew.  I’m in awe at the talent, dedication, and hard work needed to make  actionchurch services happen each week. Thank you all!

However, I believe on area of service at actionchurch is critical.  It’s why I often call actionkidz the “best part of actionchurch” . I thought I’d take a few minutes this morning to explain why:

It’s NOT because actionkidz volunteers have some of the toughest, and most important jobs…even though I believe they do!

It’s NOT because the actionkidz area is growing even faster than our main adult service on Sundays…even though it is.  (You guys are seriously making some babies!) :-)

It’s NOT because I personally am so grateful that my daughter chose to follow Jesus…and learned to love going to church in actionkidz….even though that is true!  Thank you SO MUCH actionkidz crew!!!!  I am eternally grateful.

It’s NOT because I think that our greatest opportunity…and our greatest need for more crew members is in actionkidz….even though all of those things are true.

It’s NOT because I think that actionkidz crew members sacrifice the most on Sunday…they give up their “right” to attend a church service…and instead chose to serve OTHERS by providing a great environment for their children. That is truly the best example of Loving God, Loving people, and taking action I can think of!

The reason why I believe actionkidz is the “best part of actionchurch” is because of what Jesus said when his disciples were arguing about who was the greatest among them in Mark 9:33-37

33 After they arrived at Capernaum and settled in a house, Jesus asked his disciples, “What were you discussing out on the road?” 34 But they didn’t answer, because they had been arguing about which of them was the greatest. 35 He sat down, called the twelve disciples over to him, and said, “Whoever wants to be first must take last place and be the servant of everyone else.”36 Then he put a little child among them. Taking the child in his arms, he said to them, 37 “Anyone who welcomes a little child like this on my behalf[ welcomes me, and anyone who welcomes me welcomes not only me but also my Father who sent me.”-Jesus

Jesus personally used the idea of welcoming children into a relationship with him as an example of the GREATEST thing you could do on earth.  I believe his words still stand. Thank you actionkidz crew members for being the “best part of actionchurch” not according to me…but according to Jesus.

Parents:  Have you thanked an actionchurch crew member for the incredible sacrifice and service they perform each week for your children?  Could you give up one sunday a month to serve in the best part of actionchurch?

Not-yet-parents, never-going-to-be-parents, thank-God-my-kids-are-grown-parents:  consider serving in the actionkidz area so that others with children can spend time in the service away from their wonderful little ones…along with everyone else? :-)

Everyone:  Take a moment to thank an actionkidz crew member.  Let them know they are appreciated.  Ask them how you could serve them.

I believe one of the keys to actionchurch being the best that it can be, is resourcing and assisting the BEST PART actionchurch-actionkidz.

2 thoughts on “The Best Part of actionchurch”