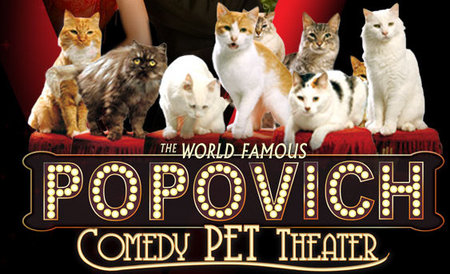 This weekend I found myself watching a show on Animal Planet about a guy who trains cats to do some pretty amazing tricks for his Vegas “pet circus” act.  (No, I’m not talking about Sygfried and Roy,  and the “cats” aren’t white tigers in ice dancing costumes.)  Gregory Popovich and his daughter train cats…stray cats they find in animal shelters… to perform in their act!

I’ll admit that I started watching the show because in the middle of my channel surfing my daughter yelled “Daddy-Cute Kitties! STOP!”, but before long I was actually interested.  We’ve had cats around our house for years, and up until this point I was certain it was IMPOSSIBLE to train them to do anything except use a litter box.  (To tell you the truth I’m not sure that actually qualifies as “training” a cat.  I have a suspicion that cats WANT to go in a litter box, and they train HUMANS to empty the smelly result. Just my theory.)    Cats do what they want.  You can train a dog.  A Horse.  A Bird.  I’ve even seen trained pigs.  But Cats are “un-trainable”…or so I thought.

I watched the rest of the show hoping that Mr. Popovich would share his cat training secret…his secret that he uses to take “shelter cats’ and turn them into vegas performers.   He did, and I’ll share it with you.

You can’t “train” cats.  You can’t “make” a cat do anything.   When Gregory Popovich finds something they are “good at” and enjoy doing, he puts it on display.   When he finds a cat enjoys jumping , or chasing a ball, or balancing on a small surface, he rewards them, practices with them, refines their “talent”, and then puts them in his act.  He takes animals that no one else wants, and turns them into amazing performers by simply showcasing the amazing things they already enjoy doing!

It struck me as I watched, that I want to be a “cat trainer” at actionchurch.  I don’t want to try to “make” ANYONE do what they don’t want to do.  I want to find people who already have things that they love doing and find ways to incorporate their God given gifts and talents into our “circus”.   I want to be a talent scout…not an “obedience trainer”.  I want to surround myself with people that seemed perfectly ordinary to others…but have absolutely amazing skills.  Thank you Gregory Popovich!

Now if I could just get my cat to stop digging at my hair at 4:30am every morning…

One thought on “Training Cats…”