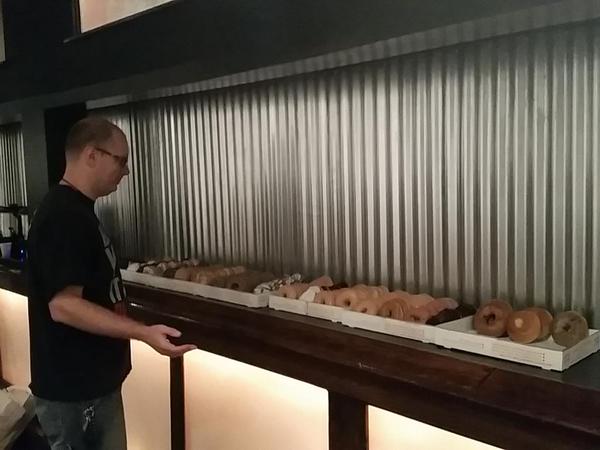 “There is nothing better for a person than that he should eat and drink and find enjoyment in his toil…..” Ecclesiastes 2:24

Friday the 5th of June was National Donut Day! Most of us in York County have it marked on our calendars. I think the bargaining unit at work might have gotten it in their contract as a holiday. And there is a rumor that a committee is forming to organize a parade…..but THAT is just speculation.

Here is a fact.   At actionchurch – we do love donuts. (And coffee) Since the very beginning, when people began gathering for “church” there have been donuts. In the early days of actionchurch we weren’t sure how we were going to afford the rent each week – let alone a dozen donuts. But each week we managed to somehow find a way to purchase the donuts. There has never been a week at actionchurch when we didn’t GIVE someone food.

The donut theme carried over to Relay for Life. I remember the first Relay my family attended. We were pretty “green behind the ears” – clueless really. We didn’t bring jackets, or chairs or a tent. My kids ended up sound asleep under the deflated bounce house trying to stay warm. Michelle Record (a.k.a The Preacher’s Wife) was the lone walker on the track. As the sun peaked above the horizon on Saturday morning Don began taking orders for a donut run. I thought (and still do think) we had the coolest preacher in the world. Donut delivery!

So, when Michelle approached me with the idea to provide breakfast for the attendees who had walked throughout the night – I thought it was a great idea. I figured she meant we would buy donuts in mass quantities, throw them on some pretty plates and pour some coffee. Clueless – really.

What Michelle meant – was a full out, multicourse, hot breakfast for ALL the RFL participants……at 7:00 in the morning……in the middle of a football field…….after walking for 18+ hours…….And I can tell you for another fact that I dropped the ball that year. Clueless doesn’t begin to define my attempts at giving people food (not donuts). The gravy was lumpy, the omelet bar was a bigger flop than the soggy green peppers, there was mass confusion and mayhem. I tried to string miles of electric cords for 20 bazillion hot plates, blew breakers left and right – Don was ready to kill me and I was ready to quit.

BUT – here is the good news! We DIDN’T give up. We DIDN’T throw in the towel. (Obviously we didn’t kill each other) And each year that we serve others breakfast at Relay for Life we find ways to improve and enjoy what we do. Even last year the torrential rain didn’t daunt our efforts. We just found a way to make it better and more funner-er…..

And knowing actionchurch – it will probably involve food.

“And they devoted themselves to the apostles’ teaching and the fellowship, to the breaking of bread and the prayers.” Acts 2:42