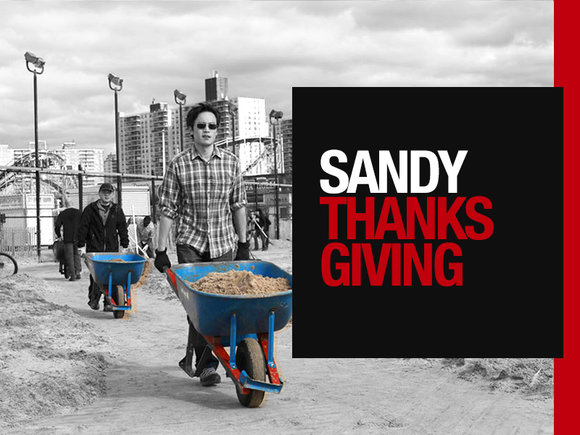 At first, when I said the actioncorps team was made up of a bunch of crazy characters I meant it figuratively.  It was a catch word for goofy, silly, fun loving, eclectic even.  After traveling with them for a few days I’m pretty sure I am back to the literal definition of crazy :-)

The names could be changed in these blogs to protect the innocent – but what’s the point – we all know who you are!  Someone had his hair shaved into an actioncog design.  Not only is THAT bizarre – but I have to question the sanity of the stylist who agreed to do it!  Someone suggested a polar bear swim in the ocean.  Fortunately, for the mom in me, we never even saw the ocean.  Hanging out in laundromats and eating Oreos, sleeping on concrete floors, trying to find food on Thanksgiving,  the Outlaws vs. the Angels, singing Bruce Springsteen tunes all the way to Jersey…. to say the least it was an outrageous couple of days.

Don’t get me wrong, there were moments of pastoral peace and tranquility (if you could ignore the snoring).  At times I felt like a shepherd, keeping my innocent little flock from going astray.

I felt like a general leading troops into battle.  And Mother Nature had waged quite the war.  Terms like deploy, drop zone and mission started popping up in my vocabulary.  I started talking in military time…”The troops will be prepared to deploy for the mission at 0700”.  And somewhere along the line our little group of rag tag warriors picked up the name ACTIONCORPS.

I love how phrases get coined at actionchurch.  They are always catchy and hip (Josiah’s marketing trade mark), but they are also meaningful.  And I like how they always involve – action – the verb.  In this case ACTION is teamed with CORPS.  A corps – by definition- is a branch of (a military) organization assigned to a particular kind of work.  Actioncorps has assigned THEMSELVES mission field work.  In the trenches, dirty, grimy, labor intensive, under crawl spaces, in the muck, back breaking, sweat making – in the field work.

Because we love God, and we love the people of New Jersey – we took ACTION – the verb.

The only thing I regret about our journey to provide relief to residents affected by Super Storm Sandy is that all of you couldn’t fit in our VW Love Bug Van.  It was the first ever attempt by actionchurch to send a mission team into the field.  And it was an amazing, powerful experience.  Seeing first hand, people whose lives were literally laying on the curb for garbage, and being able to help them through that emotional trauma was one of the most difficult things I have ever done in my life.  I wish all of you could have been a part of it.

My heartfelt prayer would be that there is never a storm as super as Sandy.  My gut feeling says otherwise.  When the actioncorps deploy again – I hope you are ready to join us.