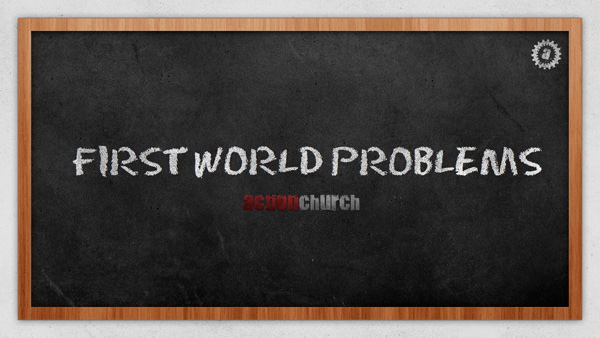 It’s pretty clear that the new series “First World Problems” has sparked a reaction with a lot of us at actionchurch.  We’ve never had a series draw the kind of immediate response that this one has.  So many of you have said that learning to live a life of happiness and contentment is something that you want and need to learn more about-right now.  I feel the same way personally.

Here’s the thing though, I believe that the response to this series has a lot more to do with listening than speaking.  The way the series came about was a collaboration between Josiah and I.  I felt like we needed to talk about gratitude and contentment…he had the great idea of packaging the idea with the “First World Problems” concept.  I wanted to do the series in November…he suggested beating the “holiday rush” and doing it in October.   I think the reason that the whole series is going to be such a benefit to us all is not because of my speaking ability…but because as a creative team we are listening.

The First World Problems series came out of listening.

To what’s happening in culture.

To what we were personally dealing with.

Maybe that’s why we have two ears and only one mouth… :-)

One thought on “One mouth, two ears.”