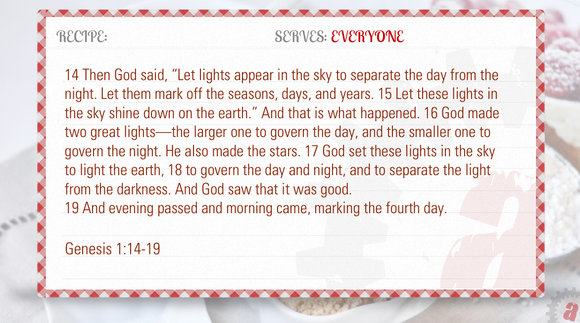 This month at actionchurch we’ve been using the metaphor of God as a Chef…with all of  us as his ingredients.  We’ve spent the month exploring his amazing recipe for community for his followers.  This morning though, I’ve been thinking about what God’s “signature dish” would be.   What is the common denominator of all God’s recipes?

Here’s what I think it is.  God likes to do things that COMPLETELY CONFUSE AND IRRITATE his most “wise” and “powerful” critics.  Chef God uses ingredients and methods that simply don’t make sense to those who demand rational explanation.

Chef God SPOKE and the world was created.

Chef God created night and day,the Sun,moon, and stars AFTER he created light.

Chef God used a mumbling, misfit, murderer- Moses (hows that for alliteration?) to become one of the greatest leaders of all time.

And yes, Chef God sent his greatest gift to the world, his son Jesus, with no hotel reservations and no physically distinguishing characteristics that would cause people to notice that he was the promised Messiah.

God delights in doing things that his critics consider the wrong way.   Chef God’s signature dish throughout scripture is doing whatever is OPPOSITE of conventional wisdom.  And I am so glad that you and I can be part of that!  I am so glad that Chef God still uses ingredients and methods that would be completely overlooked and refused by the experts.   I am so thankful to see God’s “signature” each work as actionchurch and it’s people continue to grow and thrive in exactly the OPPOSITE way that it’s “supposed to” happen.

Take a few moments to read these words of Paul to the Corinthian church…and if you identify with them as I do…take a few more moments to thank God for allowing you to be part of his “signature dish” here on earth.

26 Remember, dear brothers and sisters, that few of you were wise in the world’s eyes or powerful or wealthy when God called you. 27 Instead, God chose things the world considers foolish in order to shame those who think they are wise. And he chose things that are powerless to shame those who are powerful. 28 God chose things despised by the world,  things counted as nothing at all, and used them to bring to nothing what the world considers important. 29 As a result, no one can ever boast in the presence of God.  1 Corinthians 1:26-29