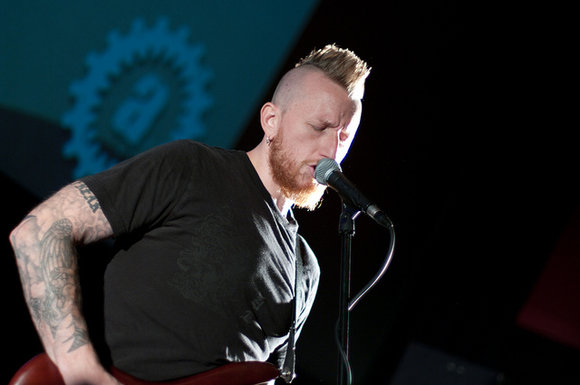 I love this picture of Mike (Bass, Vocals- The Burning State) from Garrett’s most recent download of actionchurch photo’s on Flickr.

I love the intensity that Mike (and loads of other great musicians that play actionchurch each week) puts into his music.

I love the fact that at actionchurch, a big guy with lots of tats and a mohawk like Mike is “just another guy.”

I love the fact that this week we used two clips from Disney’s “Tangled” complete with Broadway worthy musical numbers…and it was just another Sunday at actionchurch.

I know it’s not a word you hear often, but the actionchurch crowd is unflappable…”un-shockable”.  I love that about our church.  Sometime it makes things difficult. We hired a clown to make balloon animals in the crowd at Club 19 to promote a sermon series called “My life is a Circus”- and NO ONE noticed!  :-)

I love being part of an unflappable, unshockable, church. A church that is VERY hard to surprise.  A church that accepts you as you are.  A church where pretty much anything is possible on any given Sunday morning.

So bring your friends to actionchurch.  The ones that think that there is no place in a church for them…  They WILL be surprised.  They just might be “Flapped”.