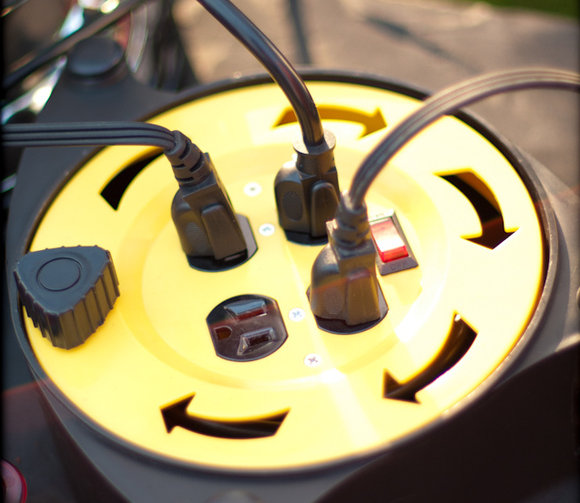 I like this photo Garrett snapped at our Relay for Life breakfast.  It reminds me of two things. One,  we have to get MORE POWER next year. Plugging 4 coffee makers and 42 crock pots and serving roasters into two-twenty amp circuits just doesn’t work! Two, I’m reminded that churches often use the phrase “plugging in” to refer to people becoming part of the mission and work of the local church.

“Plugging in” sounds a ominous.  It sounds like it would involve giving up your own identity and becoming part of a group.  Drinking the Kool Aid.  Putting on the Uniform.  Becoming part of the “machine”.   The EXACT opposite is true.

When people “plug in” or get involved at actionchurch, they actually are EMPOWERED to use their individual talents in ways that they many times didn’t even know existed. Every week I witness ordinary people discover that they in fact have gifts to direct events, create great art, teach others, create web sites,  lead others, carry more than their body weight like an ant :-) …the list goes on and on.

I’m convinced that the reason that I see this happens is because God did not give us personal gifts and talents to serve ourselves.  When we serve others, God unlocks the “hidden” talents that we have…and the local church is often where that process begins.

By the way, I mentioned that Garrett Snyder captured the photo above.   When Garrett first “plugged in” to actionchurch, he wasn’t a photographer.  In fact, I don’t believe he owned a camera.  He began serving by setting up chairs at our original Fat Daddys Nightclub location.  Over the last two years, his photography has become the “picture” of what actionchurch is.  His amazing photos have communicated what God is doing at our church to every visitor on this website…everyone who attends…every facebook friend and twitter follower.

So, this is your invitation to Plug in, or as we say at actionchurch…Invite, Invest, and Get Involved. You will be surprised at what you are actually capable of…