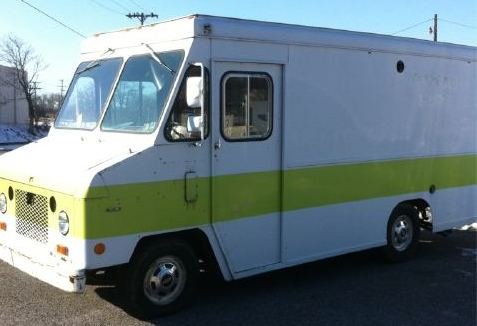 …I guess I should explain.   Sunday at the end of the service I announced with great enthusiasm how excited I was that God had provided  actionchurch with a “new” truck.   For those of you who don’t know the story, I’m sure passing the battered white panel van with the putrid green stripe in the parking lot didn’t exactly inspire you to break into spontaneous praise for God.  Others probably wondered why I was excited to no longer be driving the much newer and nicer looking truck we had been using since starting at frank theaters.

Here’s a little back story.   Two of our biggest obstacles in moving from Club 19 was equipment and storage.  actionchurch started at Fat Daddies Nightclub specifically because it allowed us to start a church without purchasing tens of thousands of dollars in sound, lighting, and projection equipment. If we had waited to start actionchurch until we had the funds to purchase the necessary equipment, we probably would still be waiting …   The nightclub rent also included storage of our signage and childrens equipment.   We moved to the larger club 19 venue with the same agreement in place.

I won’t recount all of the places that we considered as we looked for a new venue for the church as club 19 neared its closure for remodeling/relaunching, but two of the largest obstacles were always equipment and storage.   When we finally settled on Frank Theatres as our new venue, storage for our equipment was to be included in the rental of the facility.  To be completely honest, it was still a huge stretch for our church to purchase all the equipment we would need to meet at a venue that didn’t have it’s own sound and lighting…but at least we wouldn’t have to worry about a way to store and transport equipment each week.    It was a long shot.  A huge leap.  But we could ALMOST  imagine being able to gather all the equipment we would need if at least we could store it at the theatres.

Just a few weeks before we were scheduled to move, storage at the theatres was taken off the table.   We couldn’t afford all the equipment we needed…we didn’t have a place to store the equipment we did have…and we had no way to transport our gear even if we found storage.

I’ll spare you the details this morning, but you know the end result.   We moved into Frank theatres in November.   People loaned us sound equipment.  Donations paid for signage and projectors.  Jerry Duncan loaned us his bus to haul and store our equipment.  What seemed impossible happened.

That’s why I’m so excited about our ugly truck.  It’s “paid for”.  It’s legal to drive on the streets of York.  :-)   It was overhauled mechanically at a VERY discounted cost by the team at Brooks Huff Goodyear.  It’s filled with all the equipment we need to do church each week that is also “paid for”.  It’s a miracle with a green stripe…

Thank you all for being a part of it.

(Next step…paint and actionchurch cog graphics…our ugly truck is going to make a beautiful billboard.)

One thought on “Truck story…”