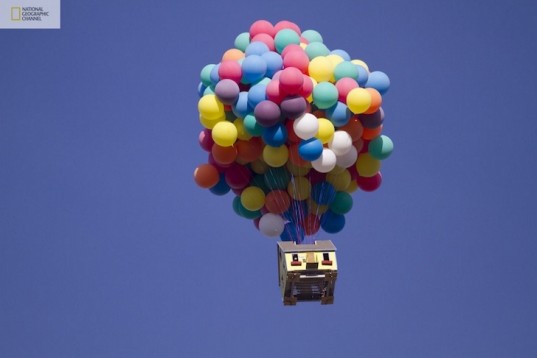 This morning I read about the story behind this picture.  Dozens of volunteers, scientists, engineers, and a couple of really brave balloon pilots gathered to re-enact the Flying house scene from the movie “UP” for a National Geographic television show aptly named “How hard can it be”.  You can read the rest of the story and see more pictures here.  No, the house isn’t exactly a “real” house…and yes, those are weather balloons instead of party balloons…but it’s still a pretty amazing feat!

For some reason this story reminds me of what we do each week at actionchurch.  Each week dozens of incredibly hardworking volunteers get together to do something that a lot of people aren’t even sure is possible.  Something that perhaps makes  people wonder “why would they work so hard and invest so much to do that?”   The answer is pretty simple.  Because we love God, Love people, and take action, we can’t just sit and read about how the people who formed the first church in the Book of Acts gathered each week…how they drew people from all over the world to experience what was happening…how they went out from their gathering and changed their world each week!  Each week we gather to act that story out, to “tie on some balloons and see if it will fly”.

Like the story of the flying “UP House”, it’s harder than it looks…but way more rewarding.

You can check out the pictures here.