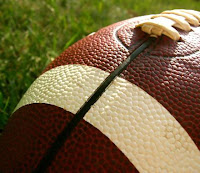 Football is here again and fantasy football is more popular than ever. Millions of people have spent a ton of time and effort getting ready for their “season”. Obscure facts have been memorized. Rules have been studied and will be debated and tested. Money is being spent, and meetings have been held. Soon the bragging will start about how well members are doing in their league…but the “game” of foot ball is never actually played! Ya got that? “Fantasy” football is millions of guys talking about football, “studying” football, having meetings about football…but never actually moving the ball down the field.

I am not a fantasy football “hater”. If you enjoy it…I hope you have a great “season”. I just think that Church should be nothing like Fantasy football! I’ve been around church most of my life and have seen it happen time after time. It is so easy to become inwardly focused. It’s so easy to talk about God, spend money, have meetings, learn the “rules”, memorize the “playbook”,work on our “club house”, and pat ourselves on the back for “winning”… and not impact a single person outside our “league” of fellow Christians. It is so easy to put all our effort into “learning” about church and never become the churches we study, where the hungry were fed, “slaves” were freed, lives were changed and the broken were healed! Because of this I think most of our neighbors who don’t attend church view us in the same way I personally view fantasy football-They don’t mind that we get together and “have our fun” on Sundays, they just really don’t want to hear about what happens “in our league”.

I want actionchurch to be a church that actually plays the “game”. I don’t want to be a gathering of “fantasy Christians”. I want to play to win-not “defending the faith” but actually advancing a cause. I want to “move the ball” for church and actually change peoples mind about what followers of Jesus could be like. I want to attempt things that are too “big” (like having a tent at the fair before starting public meetings). I want to be a Church that is known for giving instead of taking. Because of this, we will sometimes fumble the ball, we will get “dirty”, we will bleed, and sometimes we will even “lose a game”. I’m fine with that,we are actionchurch after all. It’s what we do… The name “sit-around-and-talk-about-it-church” was already taken.