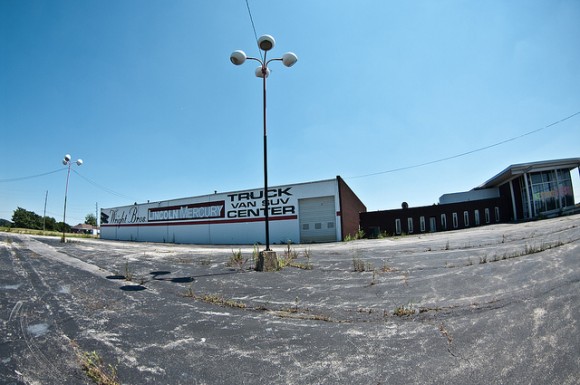 It’s a little ironic that I was so wrong about a property called “Wright Brothers Lincoln Mercury”. Three years ago we attempted to buy the property. We attempted to borrow for the property. We talked to bankers and lawyers.  We even asked Ford Motor Company to donate the property to actionchurch. We even considered teaming up with a  denomination, in order to get the funding and support necessary to make the property our church home.  ALL of those things are actions I’m TOTALLY not comfortable with to this day. But, I attempted all of them in order to purchase or lease the property for actionchurch.   I’ve still got the floor plans and the mock-ups of what the exterior would look like as an actionchurch..it was awesome…and I was wrong about all of it.  That was VERY clear Sunday as we drove past the excavators tearing the building down to make way for a new hotel.

It would be very easy…and a little tempting…as a leader to totally “forget” that happened.   Not that many people know that story any more.  We are blessed to have a great home at Frank Theaters that looks like it was built for us.  We have EVERYTHING we need to reach WAY MORE people than we are reaching now…no excuses.  I’d like to just forget about it personally.  It’s embarrassing.

However, as I study the Gospels and the Book of Acts for the “AFTERWORDS” series, the writers recorded the failures and faithless moments of the apostles, again and again.  They could have sanitized the story.  The could have made every Apostle look infallible…but they didn’t.  Instead, they recorded the truth and let GOD be the hero of the story instead of men.