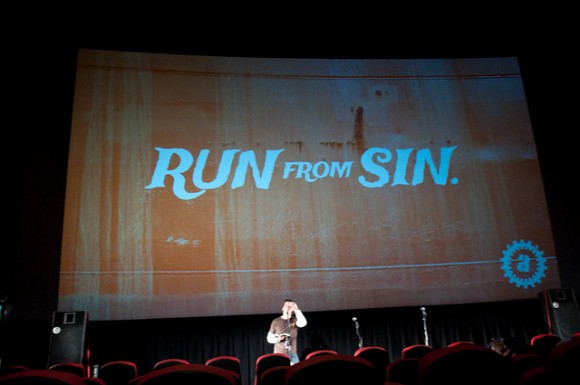 This month we’ve been talking about running AWAY from sin that harms us, and TOWARD right living that leads to a fulfilling and consequential life. This past Sunday Rich Haas shared how loneliness can lead to failure in our efforts, and Christian Community can actually help us become MORE successful in avoiding the sins that seek to harm us.  (If you missed Sunday, the podcast is up and I highly recommend you take the time to check it out)

I’d like to add one more word of caution this morning. Most times that I’ve mentioned running away from sin in this series, I’ve used the metaphor of “running from a bear”.  (I’m not sure why…there are no bears in my neighborhood… I’ve never run away from a bear…and if I did the bear would definitely win.)  “Running from a bear” just sort of popped out of my mouth, and I’ve even seen it repeated by others as a metaphor for dangerous sin that creeps up on us and should trigger our God-given Fight or Flight response.  It’s not a terrible metaphor when considering the destructive potential sin has for our lives…but it sort of fails in the subtlety department.   Here’s why:

One morning of deciding to decorate your living room with your garbage, instead of taking it to the curb can eventually lead to a starring role on “Hoarders”.

One week of simply replacing all areas of the food pyramid with Christmas cookies can eventually lead to a starring role on “Biggest Loser” if it continues into the New Year.

One “more” can lead to a chance to star on your own episode of “Intervention”.

You can definitely make the case that I know far too much about so-called “reality tv”, (BTW I believe Duck Dynasty is the best show on…period)  but you can’t deny that most of the people who wind up in starring roles NEVER intended to find themselves in their present situation.  Every sad story started somewhere…some morning…some evening…some lonely midnight when it seemed like no one was looking.  Most didn’t fail to outrun a charging bear…instead they didn’t resist a seemingly harmless “little thing”.

You probably won’t get chased by a bear today.  You probably won’t be tempted to do one super-secret-sinful-terrible-thing that could clearly ruin your life.  That would be too easy.  It’s the little things.  The “character-testers” that will probably come your way today…and they won’t be nearly as dramatic or easy to spot as a charging bear.   Run away anyway.

“…so run from all these evil things. Pursue righteousness and a godly life, along with faith, love, perseverance, and gentleness. Fight the good fight for the true faith. Hold tightly to the eternal life to which God has called you, which you have confessed so well before many witnesses.”  (1 Timothy 6:11-12)