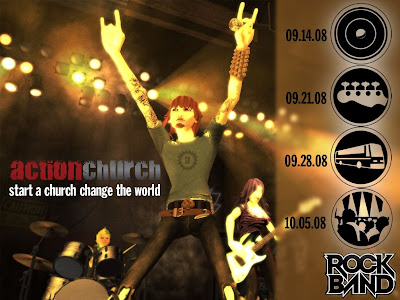 Week one of “Rock Band” the series…I love talking music…and I love talking about the potential of the church. This series is going to be a lot of fun! Today I talked about “our influences” from Acts Chapter 4. The First church was controversial, “famous”, had sell out crowds without “selling out” like any great Rock Band or Church…turned their world upside down! My favorite verse from today was… Acts 4:13 When they saw the courage of Peter and John and realized that they were unschooled, ordinary men, they were astonished and they took note that these men had been with Jesus. Wow…I want people to say that about me someday.
The Highlights:

I’m tired…I smell like sweat, stale beer, and smoke, and my head is pounding…Wow was it great to be in Church today! Thanks for all of you who help make it happen in every way.