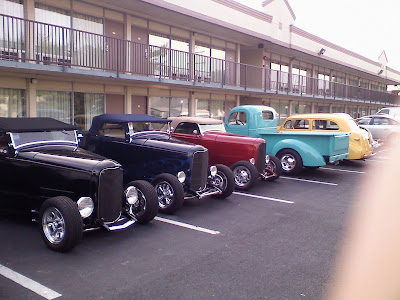 It’s street rod weekend in York…above is a shot from the motel parking lot next to Fat Daddy’s.
Lots of “action” today. I’ll try to remember the big stuff. I spoke from Mark 5 about the naked demon possessed dude who lived in the graveyard…”Legion”. The most amazing part of the story is that the people of the area sent Jesus away because they were afraid… after he messed up their “pig farm”. A couple of important take aways from today were: What are you afraid of that keeps you from having an encounter with Jesus? Also, our stories are so powerful…the same people that sent Jesus away because they were afraid were “amazed” at the now fully clothed and sane dude’s story…pretty cool.

It’s been an awful week…and an awesome/awful Sunday…this is why we do actionchurch. In spite of all the tough things we are facing I was “praising God like I was Pentecostal” on the way home…too cool.