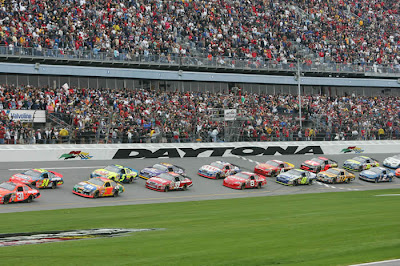 The next three sunday’s are going to be amazing. It’s the Super Bowl this week, actionchurch launch next Sunday, and the following week is the Daytona 500!

It’s tempting to use “Super Bowl imagery” to talk about our launch next week (2.10.08). It’s tempting to say “come on folks, it’s the big game…let’s give it everything we have…this is what we’ve been waiting for”. In reality, I think our launch has a lot more in common with Daytona. The Daytona 500 is without question a “big deal” race. It’s sometimes called the “super bowl” of nascar…lots of people show up….but it’s the First race of the season. Daytona isn’t the end…it’s the beginning. Win, place, or wreck you load up and head off to the next race the following Sunday.

I’m expecting great things next Sunday. I think people all over this area will be surprised by the interest that a “church for people who don’t like church” will generate. It’s going to be really satisfying to see people actually engaged and excited about getting up on Sunday morning to go to church…even one that meets at Fat Daddy’s Nightclub! But no matter what…even if we “blow up” (not literally hopefully) we “load up” and prepare for the next Sunday…and you know what? I believe week 2 is going to be even better than launch…and week 3 after that… and Easter is going to be freakin’ amazing. (Just wait ’til you hear what we have planned!)

Ladies and gentlemen…start your engines!

” Therefore, since we are surrounded by such a huge crowd of witnesses to the life of faith, let us strip off every weight that slows us down, especially the sin that so easily trips us up. And let us run with endurance the race God has set before us.” Hebrews 12:1