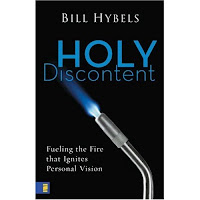 I’ve been reading the new Bill Hybels book, Holy Discontent, and it asks one very important question. “What can’t you stand?” Bill has a theory (and I “buy into it”) that every person who “changed their world” from Moses to Mother Theresa was initially motivated by a situation that they considered intolerable. He theorizes that ordinary people can work in concert with all-powerful God, when we our view of injustice and human suffering lines up with God’s. This principle truly came into focus yesterday at church as I listened to Pastor David interview an HIV positive African woman who started an AIDS awareness and relief organization because she could not stand to see so many of her family and community die of the disease. I always walk away from a service at LCBC inspired…but I thought this week was amazing.
So what is it that you find intolerable? What can’t you stand? Moses couldn’t stand to see his people brutalized. Mother Theresa couldn’t stand to see the poor literally dying in the gutters of Calcutta. Harriet Tubman couldn’t stand the idea of her people being enslaved. What is it that moves you past tears into action?
I can’t stand the idea that hundreds of thousands of people in York County alone are missing out on a life of purpose and meaning and an eternity of reward…I truly cannot tolerate the idea that many of these people are “missing out” because the “bride” of Jesus has become so self-absorbed and “out of shape” that she (the church) is many times irrelevant and “unattractive” to our community. I want more that anything for actionchurch to be able to provide another “alternative” for the lost, letdown, and looking , the “outsiders” of our community to truly experience the love of Jesus. I “cannot stand” the thought of that not happening.
We are currently looking for others who can’t stand the idea of church being irrelevant and boring. We need people who cannot tolerate people not feeling welcomed and “invited” to church. We need people who can’t stand the Idea that children are being bored and turned off to the “greatest story ever told”. We need people who can’t stand the idea that the creator of music would not have the very best at gatherings supposing to honor him. We need people who cannot stand the idea that the church would not use the very best technology has to offer to further our cause. We need people who can’t tolerate the thought of the church thinking that it is enough to “teach” people without first meeting their physical needs. What can’t you stand?