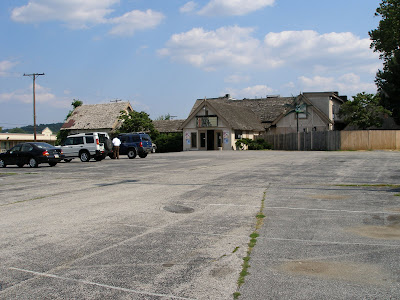 No, I didn’t get discouraged by our difficulty in nailing down a location and decide to “tie one on”. My story is far stranger than that. I found myself sitting at the bar at Fat Daddys Nightclub at 4:30 in the afternoon yesterday, waiting to talk to a reluctant owner about renting the place on Sunday mornings for actionchurch.

Let me tell you how I “got there”. Last fall, in the very earliest part of “downloading” the vision for actionchurch I was struck with a frighteningly unique idea. As I began praying and processing possible locations, it struck me (like a brick dropped from an overpass) that perhaps a nightclub, particularly Fat Daddys, might be the ideal venue in which to launch our church. The more I thought about it and prayed about it, the more reasons I could think of that would make Fat Daddys an ideal venue. (I’ll post those reasons tomorrow.) As bizarre as the thought of starting a church in a bar was…I couldn’t shake the idea. I told my wife what I had been thinking and praying about…she was rightfully horrified. Michele is now the biggest supporter of launching out of a club…(maybe I can get her to share here change of heart here sometime.) As I became more and more convinced that this crazy idea was actually from God I even told my 67 year old Southern Baptist Minister Father the “news”. He was also appalled at first but now plans to attend our launch service. (I think that may be my parents first time “setting foot” in a nightclub…I’m not sure what that says about my “influence”.)

Four months ago I began approaching the owners of the club with the “opportunity” of renting their facility to us on Sunday mornings. To say they were less than excited with the possibility of renting to a church would be an understatement. In fact, the first response from their managing partner was “Do you have any idea how ridiculous this idea sounds to me”? I had to agree with him… I am not a “salesman”. I suck at “overcoming objections”. If you’ve ever watched the first half of Tommy Boy you’ve seen an example of how much I suck at sales! Somehow, I could not shake the belief that Fat Daddys was “our place”. I kept contacting the owners, trying to be persistent but hopefully not too annoying. I prayed that God would “release me” from this silly idea. I prayed that he would guide me to “normal venue” for a church…he never did. Finally I had a “break through”. I went by the club on Saturday afternoon, the lights were off but the door was unlocked so I wandered around until I came upon a woman in the kitchen. I told her my “story” and she introduced herself as the mother of the brothers who owned the club…and she liked the idea of actionchurch…a lot! As I left she asked me how I got in the building… she said she was sure the front door was still locked!

To make an already long story a little shorter… After God “opened the door” and “mom” got involved the attitude of the owners changed, big time. They actually listened to my “pitch”, as crazy as it sounded. They agreed to consider our offer. Later, they agreed in principle to rent to us. I got really excited! Then came three weeks of obstacles…of un-returned phone calls…of waiting…and as I posted yesterday, of knowing that if God didn’t move-this deal was not going to happen! I believe in the favor of God. I believe that if could work through foreign kings in the old testament he can work through nightclub owners today. Last night he did! We can now invite York County to:

Stay tuned for a lot more to come about this announcement!