I can’t say that I “regret” taking part in the “mission” this week. It was difficult, but I did learn something that might help all of us on our mission to become “action heroes”. I’ll spare you the 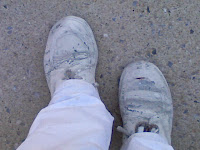 details but in the “territorial” world of contracting that I work in being “on schedule” makes you “right”. I know those standards may seem amazingly high but in “contractor world” just showing up on the day you said you would to do your job makes you “the man”. This may be shocking to an “industry outsider” but some contractors don’t show up when they say they will. Some (gasp) don’t even follow through on promises they make! I ran into just that “rare” sort of contractor this week that was behind schedule and a few bad excuses short of the good graces of the site supervisor. I had a decision to make. I could use my “rightness” and my “position” to kick everyone else out, and get my painting done as scheduled. (That’s what the supervisor suggested) Or, I could extend mercy to the “offenders” and work around and with them until they caught back up.

I chose “mercy” and I wish I could say everything went easily from that point on. In reality, it made my week even more difficult. No one said thank you. In fact, I’m not sure that my kindness was not viewed as weakness by the other contractors. Being “nice” may make it harder to defend my “territory” in the future. Oh, well… I did learn this: Sometimes the only way to “use” your position to help others is the “give up the rights” of your position… Kind of like the “ultimate action hero”!

6 Though he (Jesus) was God, he did not demand and cling to his rights as God. 7 He made himself nothing; he took the humble position of a slave and appeared in human form. 8 And in human form he obediently humbled himself even further by dying a criminal’s death on a cross. Phillipians 2:6-8