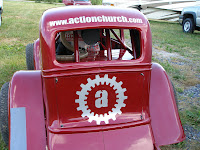 I think as followers of Jesus we are so sincerely amazed by the things we see God doing that we naturally say stuff like “It was all God” or “It was way beyond anything I could have planned”. We do it out of a sincerely thankful heart. I have found myself saying those very words lately as I talked about sponsoring the “actionchurch car”. I don’t think we should ever stop being thankful or in “awe” of what God does. I’m beginning to think though, that it is not good leadership to “leave out” the details of our preparation as we share our stories. In doing so we allow people to think that serving Jesus is more like playing the lottery, than the hard work that it actually is. It can sound like we just pray and once in a while “our number comes up” and God does amazing things…

I find in both scripture and life that God does amazing things we could never “plan“, when we have

busted our butts to be “prepared“! Noah (Evan) could never have “planned” for “his” boat to be guided through the worst flood in history, land on the top of a mountain, and allow him and his immediate family to repopulate the earth! However, there was the little matter of “preparing” by spending about 100 years building the ark!

I’m really excited about sponsoring the “actionchurch car” this year. It’s definitely a “God thing” I could have never planned for these opportunities. However, last year, preparing our logos and “image” was some of the most difficult, expensive, and seemingly slow moving portion (3 months) of this thing we call “actionchurch“. I am so thankful we were obedient to God’s plan or we would have never been prepared for the opportunities we have encountered lately.
Are there any “preparations” you feel like you should be making? Are you ignoring making those preparations because God has not “revealed the plan” to you? Remember, it wasn’t enough for Noah to “pray about” the ark, journal about the ark, or talk to his pastor about the ark…he had to build it long before he ever even saw rain. Without preparation, that story could have turned out very differently.