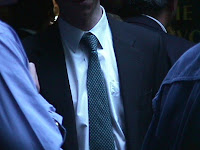 I’ve been reading 1 Samuel and the story of Eli’s sons makes me think of America, 2007. The Bible says that Eli’s sons Hophni and Phinehas were “scoundrels”. They were priests of Israel and although Eli had never disciplined them, they had been raised and trained all their lives in the proper ways to sacrifice the peoples offerings to God. Their job was to serve the people by using their training and knowledge to offer their sin and guilt offerings correctly to God. For their “trouble” God allowed for the priests and their families to be fed and cared for out of the tithes of the people. However, “Eli’s Boyz” forgot they were there to serve the people and began just taking the choicest cuts of meat before the sacrifice was performed. They begin to think it was all about them. Every Israelite who came to sacrifice was seen as just a buffet waiting to happen. “The Boyz” got fat, and God got seriously angry. You can read the story here (link)

Politicians: Flash forward to 2007. Our politicians were elected to serve the people. They were supposed to use the tax “offerings” of the people for the best interest of our county. Somehow, politicians of both the “Elephant brand” and “Donkey brand” have come to think that it is “all about them.” Can anyone actually say “public servant” with a straight face? Every taxpayer and corporation is seen as just a potential campaign donation or tax check. Somehow, life goes on and politicians continue to have meetings, make speeches, and talk about doing the work of the people. However, the public is not truly fooled, and respect for politicians continues to plummet. Many people see government as an entity that restricts their lives with laws, and constantly tries to take their money.

Preachers: God put “shepherds” and “teachers” in place to serve the sheep. For their trouble, God allows for them and their families to be cared for from the tithes and offerings of the people. Over the years, the “game” has shifted from “leaving the 99” to find the one “lost sheep” to “pleasing the 99” so they will pay our salaries. Preachers work to win donors and volunteers to support the programs of the church instead of using church resources to “let our light shine in the community” It’s become all about us. We ask for “church discounts” from local merchants and make sure that our tax-exempt status is always honored. Every “visitor” is seen as a potential buffet of money and talents. Somehow, life goes on and churches continue to have meetings, preach sermons, and talk about doing the “work of the Lord”. However, the public is not truly fooled, and respect for preachers continues to plummet. Many people see Church as a place that restricts their lives with rules, and constantly wants their money.