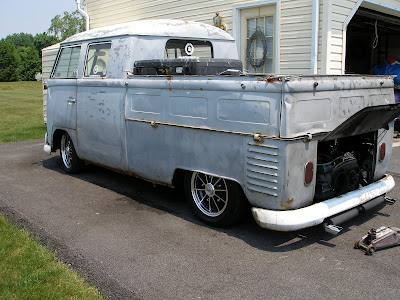 Lately my old VW work truck “Brutus”, hasn’t been “feeling well”. The engine has had a bad “miss” and it has generally just been running poorly. Since I’ve been busy and not feeling so well my self, I let it go. I just pushed the gas pedal harder and tried to ignore it. I finally had the time and the energy to work on it yesterday and wow, what a difference! I changed one simple thing and he runs like a new truck… Well, maybe not a “new” truck, but I had forgotten how much fun he was to drive when everything is working right!

Life is kinda like that isn’t it? Sometimes little things go wrong in our relationship with God, others, or even in our health. Little things get broken. We screw things up, we sin. It’s not a perfect world. The problem is, we don’t take time to fix them, ask forgiveness, find out what’s wrong. We are so busy we just push the “gas pedal” of our life a little harder and try to ignore the problems that weigh us down. Sometimes things completely “break down” and we have to stop and fix it. Usually though, we just keep on going even though life has become “less powerful”, less enjoyable, less full. I was shocked recently when I became so ill to discover that I had probably been walking around with mononucleosis for weeks. I thought I was just tired and getting older…I didn’t take time to stop and see if something was wrong before I “broke down”.

I’m trying to be more proactive in my life. I hope you will too. Let’s agree to not ignore the things in our life that we actually have the power to “fix”. Let’s ask forgiveness sooner rather than later. Endeavor to ask God to search our hearts and minds for things that could cause us to “break down” later. Let’s try to live our lives at “full power” whenever possible instead of limping around due to our own neglect.

For the Gearheads: Brutus is a 65 VW doublecab truck. Low? yup, 3 inches off the ground and the lowest point. VW/porsche Type IV power. 944 four wheel discs. Front end narrowed 5 inches. IRS rear suspension. BRM wheels… “custom paint” by me. HA …and yes that is an actionchurch sticker on the window.