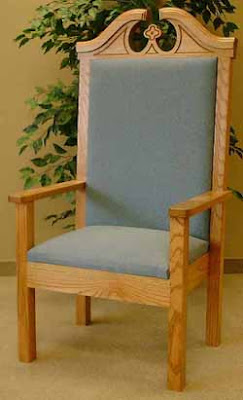 …had a funny conversation last night with someone who grew up in the same religious background as I did about the “Chairs-that-look-like-thrones-that-no-one-sits-in” on the platform of churches… (I found out they are called clergy chairs.) The funny thing I remember about them growing up is that NO ONE ever sat in them…but they were present at every church I attended. Long after whatever function they served was over…Churches still purchased them or moved them to their new auditoriums…because you couldn’t possibly do church without “Chairs-that-look-like-thrones-that-no-one-sits-in”.

As much as that makes me laugh, it happens in every church (including actionchurch) if we don’t constantly guard against it! It’s so easy to let something outside of our mission become “tradition” because “that’s the way we have always done it.”

Can you imagine the strange “traditions” that actionchurch could develop if we forgot about our mission of introducing people who don’t like church to Jesus, and focused on our surroundings at Fat Daddy’s? It would become tradition to have a giant Buddha statue in the back of any auditorium we moved to… “Tradition” to have an atm in the lobby and Bud Light signs on the windows… “Tradition” to have go go dancing platforms in the children’s area… Sure it sounds silly…but that’s “the way we’ve always done it”!