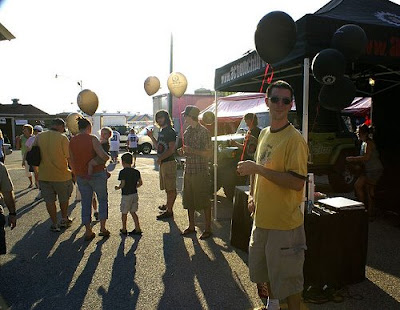 I can’t help but compare this years York Fair “coffee and balloon extravaganza” with last years event. The main difference this year is that there are so many people doing things better than I did last year. We have people who can make a better pot of coffee than me… (a couple of the batches I made last year were only semi-liquid…like the kind that you buy in a truck stop at 3am). Everyone is better at giving away balloons. (For some reason kids are generally frightened by me…go figure…just a long haired dude in a black t-shirt lunging at them with a balloon…) We have lots of people that are better at telling what actionchurch is all about than me. Incompetency has its rewards!

I think actionchurch is getting better as a whole because of my (self admitted) incompetence… Our visuals are so much better since Josiah took over. (Have you seen the new invite cards?…) Our pictures are much better since Ashley Z took over… Set up has never been better than the last few weeks since Bill, Dave, Garrett and crew completely raised the bar… The cool thing is that the more things the people of actionchurch “do better” than me…the more time and focus I will be able to put into the one area that I actually excel at…drinking massive amounts of Caffeine and dreaming up new “adventures” for us to embark on as a church… dreaming of things that seem impossible even in light of the great things we have already seen God do as a church. (Which of course will highlight some new area of incompetency and allow many other people to participate and make actionchurch a better place!)

Play the “incompetency home game”:
What do you suck at…how could you replace those efforts with something you excel at?

(Since Michele reads this blog I must add that I have never used this “incompetency strategy” at home to “show” that I am incapable of loading a dishwasher, clothes dryer, or hitting the hamper with my socks….YMMV…may cause cranial bleeding. Performed on a closed track by proffessional drivers.)