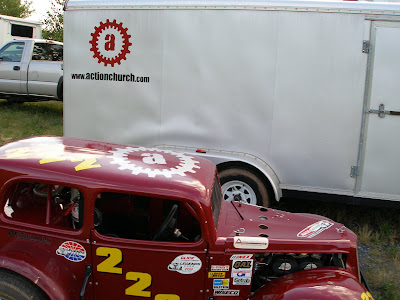 We’re going to be going to the races tomorrow night (July 3) to cheer on the actionchurch #222 car at Susquahanna Speedway. (link) This will be the first time that we have been out to the track this year since most of the races are on a Saturday night. (a “school night” around our house since we get to the club early on Sunday mornings) I’m looking forward to seeing Bob run the car but I am bummed that the Extreme stocks aren’t running until Saturday night. Lance Danmeyer has been attending actionchurch for a couple of months and has put our logos on his #87 Camaro in the Extreme stock division… I was really looking forward to seeing two actionchurch cars running around the track! I’ll try to get picture of his car up on the website.

If you get out to the track this week cheer on the #222 Legends car on Thursday night and the #87 Extreme Stock Camaro on Saturday night… As Darrel Waltrip would say so eloquently…boogity boogity boogity!