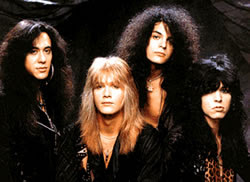 Okay, maybe not “everything”… but I was having a conversation with Josiah and some of the guys from The Recovery after church yesterday and I realized that starting a church is a LOT like being in a rock band.

I’m really thankful for my “band mates” at actionchurch and it’s not surprising that most of them have “band” experience…people used to ask when we first were promoting actionchurch “is this a “real” church or a band? I’m not sure exactly how to answer that question except to say that our goal is to introduce people to Jesus instead of just selling out shows…

Bonus Question: Do you recognize the Princes…or should I say “Princess’s” (hint) of Hair Metal pictured above???