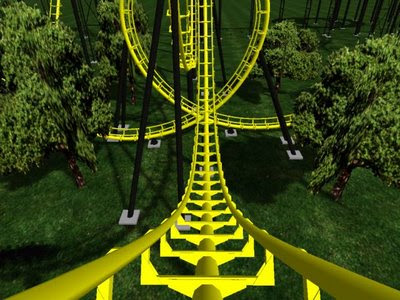 Living out life as part of Jesus “kingdom plan” for earth is a lot like being on a roller coaster… It’s exciting, at times exhilarating, and sometimes you are scared to death and want to throw up! Here’s some of the actionchurch “roller coaster” if you care to follow along:

2007 was like the long slow climb up the first hill-Lot’s of anticipation and excitement. Launching on 2.10.08 was like the start of the first “big drop”- it starts out to be fun but as the “drop” continues it’s just terrifying. We had big plans for Easter. We intended to use the 6 weeks between launch and Easter to gather volunteers and funds for a big Easter Community event in a local park…it was going to be phenomenal…like a second launch. The problem was that instead of “gathering” funds…we were “hemorrhaging” funds… we prayed desperately for God to help us…I bugged everyone I knew trying to raise funds… Things were looking grim and we wondered at times if actionchurch would even survive.

Last week at the beginning of our new series “the Cure for the Common Life” I did what no preacher should ever do…I was completely honest and Candid with our crowd. I told them that we were struggling…I told them that we were going to cancel our Easter event due to lack of funds…I told them I was disappointed with God…with myself…with life… It was the hardest thing I have ever said…I “argued” with God all week before…I would much rather “put on a happy face” even when things are tough. I hate being vulnerable.

Immediately after the service the “upswing” of our ride began (apparently God and people are pleased when I am obedient and admit I am an idiot!)…people are generously meeting the needs of actionchurch. We had a new “idea” for a way to impact our community on Easter…but we still didn’t have the funds to pull it off. Yesterday the exact amount came in from a generous person I have never personally met… but was affected by Sunday’s service. Unbelievable!

This ride scares me to death at times…but I never want to get off. I said last week that in the most disappointing time of your life serving Jesus and being part of his kingdom plan for earth is the best possible way to live…Some weeks it is just simply exhilarating!