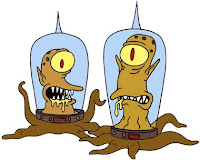 Yes, I believe in aliens. Not the little green kind on television, or the creepy Tom Cruise scientology aliens. But in the strictest sense of the word I believe in “aliens”.

I believe a being from outside our universe created and controls our planet. I believe thousands of years ago he sent his son disguised as a human to rescue us from ourselves. I believe this “alien being” guided and directed various humans to write a book over thousands of years that contains insight and direction into pleasing him. I believe it is absolutely imperative (for their own good) that everyone believes and serves my “alien” master!

Does that story sound a little strange to anyone? …Anyone think I need a little rest and relaxation in a mental hospital? Maybe so, but my “alien” story is essentially the story of our faith in God and Christ. I think because over the years such a large percentage of our population has also believed in God, we have become lazy and complacent about spreading our message. We don’t take into account how “alien” our story sounds to those not born into the Judeo/Christian tradition. We assume because we have spent so much time at “alien conventions”, that everyone else believes in “aliens” and our “alien book”. We attempt to “prove” the Bible, using the Bible, when speaking to people who are not sure they believe the Bible… Unlike Jesus and the Apostle Paul we often separate Biblical principals and doctrine from the “real world” when we tell our “alien story”.

So how would you tell your friends and family that they needed to “believe and serve” aliens if their life depended on it? How would you approach them?

The truth is out there!