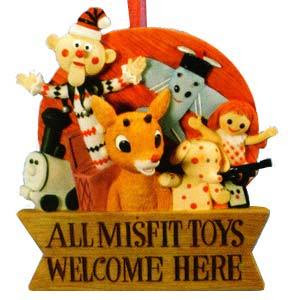 One of my core beliefs is that ordinary people can do extraordinary things when they are part of something God wishes to accomplish. (So the trick is really not to “get God on your side” it’s to be on “God’s side”.)

I am so excited to see that core belief in “action”. Even though we may joke that we are the “island of misfit toys” I really think that we are instead part of a long tradition of exactly the kind of people God chooses to use.

God loves to use a shepherd boy to kill a giant and become king. …A misfit running from a murder charge to lead his people out of Egypt. …A teenage girl and her carpenter fiance to care for his only son. The list goes on and on.

13When they saw the courage of Peter and John and realized that they were unschooled, ordinary men, they were astonished and they took note that these men had been with Jesus. Acts 4:13