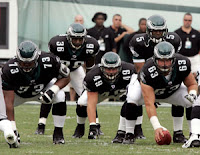 I received some “advice” about starting actionchurch that still has me thinking. The advice was basically “be careful”… Be careful not to “lose your testimony” with other Christians. Be careful to go to places and gatherings that would cause other people to think badly of you. Be careful not to hang out with “unbelievers” to much or you might be tempted to “fall away”(I’m glad Jesus never got this advice…oh wait, I think he did.) . On and on it went. Since then I have realized something, although I firmly believe I am on the same “team” as the person who gave me the “advice”… I realized we are not playing the same game!

As I thought about it I realized much of church has become about playing “defensively”. Trying not to “lose” anyone in the congregation. Trying to keep people happy. Trying to maintain a budget and a building. Trying to keep anyone from criticizing the pastor and leadership. Trying to keep the various ministries and programs staffed with volunteers. The “defensive plays” go on and on.
At actionchurch our only plays are “offensive plays”. We are called to take new yardage. We care far more about reaching people than “keeping” people. We have nothing to gain by being “defensive” and nothing to lose by being “offensive”. Being on the offensive will cause us to be a “risk taking” church. It will also drive us to our knees as huddle together and ask for God’s wisdom and blessing before our next “long” attempt. We will have a few fumbles…sometimes we may lose ground. We will never be content to just “run out the clock” because lives are at stake!
In the end, being “offensive” means some people will be offended. Some will criticize our methods…some will question our motives. That’s the price of being “offensive”. I think Jesus said it best when he was criticized for being offensive:
33 For John the Baptist didn’t spend his time eating bread or drinking wine, and you say, ‘He’s possessed by a demon.’ 34 The Son of Man, on the other hand, feasts and drinks, and you say, ‘He’s a glutton and a drunkard, and a friend of tax collectors and other sinners!’ 35 But wisdom is shown to be right by the lives of those who follow it.” Luke 7:33-34